If you're planning to become a system administrator, one skill that you will inevitably need to master is Windows server OS. The stats chart on Statista shows that Windows Server OS was used as a backbone on 71.9% of servers globally in 2018. And let me tell you: that's one of the reasons why it's a good idea to start a Windows Server 2016 tutorial and get in on this trend.

Why am I the one talking about it? Before starting as a system administrator more than a decade ago, I was a programmer. And once I've switched, I landed in a different world. I didn't even know how to create a virtual machine! And there was so much I had to learn about Windows Server OS. With all of this experience now, my goal is to assist you with the essential concepts and techniques of Windows Server 2016 so that you can get a job, and you're ready to do the necessary tasks right from the beginning.

Why is it a good idea to learn how to use Windows Server 2016?

The upgrades made in Windows Server 2016 were mainly dealing with the emphasis on remote management and automation. New features also include identity management and enhanced security so that data and access to information remain integral from end to end, either if they're stored on your computers or in the cloud. The Nano Server installation option requires less than 200MB of RAM while idle. The 2016 version also introduced new resiliency solutions, which make sure that virtual machines don't crash even in such events as SAN glitch or problems with network cable being replaced the wrong way. Organizations have been active at deploying Windows Server 2016 due to the mentioned and other extensive capabilities.

What main benefits you can expect from this Windows Server administration tutorial?

Want to know how to create a virtual machine or how to use Windows Server 2016 administration concepts and techniques? I'll demonstrate to you the mechanical part of delivering results at tasks that you will have on your hands, and I'll also explain the "why?" elements in this easy to follow Windows Server 2016 tutorial. Why am I doing this? Because I care that people who have less experience and practice than me can get the best practices and recommendations to accomplish their goals.

When you finish my Windows Server administration tutorial, you'll also be competent in the following:

Different sources indicate server administrator salaries to average $59,000 to $65,000 a year, which is a generous amount for a nine-to-five job. Get the right skills in one place – this Windows Server 2016 tutorial, do plenty of practice, and you'll be ready in no time to take one of these positions at will! 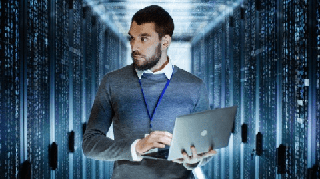