Take Your Camera Off Auto Mode for Canon Entry-Level DSLRs

Photography and Manual Mode Simplified
Course from Udemy
44 students enrolled
en
How to shoot the photos you and your DSLR are capable of.
The building blocks of exposure and how to shoot in manual mode confidently.

Classes are customized for your DSLR. This class is for the following Canon Entry-Level DSLRs (Canons with one dial).

If you have another camera model, please lsee my other classes in this listing or search Take Your Camera Off Auto Mode and one of the following camera types:

When I first started teaching photography in 2007, I taught it just like a photographer. In a very technical way. And I used to explain what every button on their camera did. I realized quickly that, for the average person, it was way too much info! They would get home and not know where to start. It would break my heart when people would tell me weeks after my class that they weren’t using manual mode yet. I had to find another way.

So I took some content of the class. A whole hour’s worth! I took the settings out that I never used myself since I shoot exclusively in manual mode. While I realized it would be nice to teach them everything, my goal was for them to start taking control of their images and start doing what they wanted to, instead of letting the camera. After that change in 2009, when I’d ask people if they were shooting in manual, they’d say, “of course, why would I shoot in Auto anymore?” Ahhh… Music to my ears.

My goal after my class is for you to be able to survey a scene, think about what you would like aesthetically, and be able to choose your settings in a way that will allow you to have control over those aspects, like your background blur, your shutter speed (so that your photo is frozen or blurred as you like) and your subject is as sharp as can be. It’s not a 15 hour class, but as I learned a while back, even 4 hours can lead to photo info overload. But at around 2 hours, you’ll see that my class packs a punch and won’t overwhelm you. I don’t like to say my class is just for beginners since it’s for anyone who isn’t shooting 100% in manual mode. With that said, I’ve had people who have just unboxed their camera sitting alongside people who were shooting professionally, but just not quite confident in manual mode so it’s for all levels.

Are you ready to Take Your Camera Off Auto Mode? 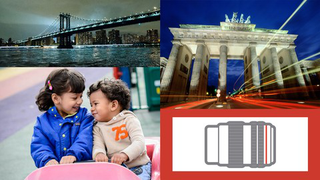