THE NEXT GENERATION OF PILOT TRAINING

This is a superb training aircraft to fly after the Cessna 172.

This is one of the best and easiest jets to fly.

I downloaded it and loved it right away and I have flown many different types of aircraft.

7 hours later I put this course together to show you how I found my way around it.

This aircraft is highly recommended for taking your flying to the next level.

The T-7A Red Hawk is an all-new advanced pilot training system designed for the U.S. Air Force that will train the next generation of fighter and bomber pilots for decades to come.

Designed using a digital thread, the T-7A aligns with the U.S. Air Force’s Digital Century Series strategy by enabling the integration of new concepts and capabilities faster and more affordably through virtual testing.

The Red Hawk builds off the legacy of the Tuskegee Airmen, paying tribute to the legends of the past and the heroes of the future.

An 80% reduction in assembly hours

A 50% reduction in software development and verification time

The T-7A went from concept to first flight in three years as a result of a “breaking the norm” paradigm that includes a modular design of the aircraft developed specifically for maintainers, highly immersive training and offloading of skills and advanced fighter-like performance features that are commensurate with today’s 4th and 5th-gen fighter aircraft.

Ground-Based Training Systems (GBTS), encompassing a full range of physical devices and instructional techniques, will prepare students for and supplement training conducted in the T-7A. The aircraft is a flexible, modifiable solution that adapts easily to people, software and systems so future technologies can be easily implemented, pilots can adjust to their personal preferences and the entire system can be applied to other missions. By adapting to changing technologies and learning methods, and by downloading more expensive training, the T-7A produces better prepared pilots in less time.

The T-7A’s design includes provisions for growth as requirements evolve for additional missions such as an aggressor, light attack / fighter variant.

The Auto GCAS, developed jointly by Lockheed Martin Skunk Works®, the Air Force Research Laboratory and the National Aeronautics and Space Administration (NASA), is designed to reduce incidents of what is known as controlled flight into terrain, or CFIT. According to U.S. Air Force statistics, CFIT incidents account for 26 percent of aircraft losses and a staggering 75 percent of all F-16 pilot fatalities. 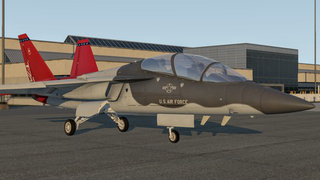