Keep you, your family and those you love Alive After Man-Made Disasters, Natural Disasters, and Civil Unrest .
Course from Udemy
7951 students enrolled
en
How to properly store and can food supplies
How to pack a bug out bag
How to navigate using a magnetic compass and topography (landmarks and the environment)
How to set up and sustain a small urban farm consisting of fruits and vegetables chickens and/or fish
How to produce alternative sources of electricity and brighten your life through solar wind and human power
How to make alternative fuel sources such as bio diesel to power your home and increase your travel radius
How to fortify your home and protect yourself and your family from looters
how to keep up morale when you are at your mental breaking point and your spirits are low

Your Family Isn't Ready For A Terrorist Attack,Mass Shooting, Hurricane, Flood, or Tornado ! Will They Survive ? If The Government Collapsed Tomorrow Can You Feed & Protect Them?

Will They Die Because You're Not Ready ?

Disaster preparedness and survival skills are enjoying a resurgence in popularity, not only because of popular movies and television shows, but simply because the world as we know it is becoming more and more chaotic and more and more unstable. 30 Day 100% Risk Free Offer!

Think about these things for a minute ...

There have been an increasing number of natural disasters, from tropical storms to earthquakes and wildfires, hurricanes and tornadoes and everything in between and people are becoming more cognizant of these facts, each and every day and have a desire to learn the skills necessary to survive disasters, whether they are natural or man-made, such as a riot stock market collapse or electrical grid collapse. Many people mistakenly believe that the government or emergency services will provide all the help they need.

Give yourself a fresh start by enrolling in this life-changing course now. Every moment you delay, you lose out. Simple as that.

“WARNING: Your Survival Could Depend On Your Next Choice"

When the time comes, however, it could take emergency service response teams hours days, weeks and even months to respond effectively to the disaster.

Nothing is kept secret - I reveal all I know ... and as I test even more things, those that are successful are added to the course - at no extra cost to you! This is a course that will continue to grow and grow.

As well as  the Udemy 30 day guarantee, you have my personal promise that you will  be wowed and delighted by what you'll learn in the next 3 to 4 hours ...  and you'll be kicking yourself if you already have this Udemy course.

So in the meantime, you and your loved ones will have to fend for yourselves but, if you don't know how to survive in an urban environment, this is going to be rather difficult.

Here's Exactly What YOU Get Inside The “Survive In Place" Urban Survival Course:

Urban survivalist and disaster preparedness course will teach you everything that you need to know about surviving a man-made or natural disaster in urban settings.

Click the "Take This Course" button, on the top right because every hour you delay is jeopardizing not only your Safety but the Safety of Those You love!!!...Scroll up and Enroll Now!

Everything from medicine to food supplies, shelter building and other primitive construction, basically everything you need to know to be a 21st-century urban Daniel Boone or Davy Crockett and not only will you learn to survive in an urban disaster setting but you will learn to thrive.

It has been said that a person can only survive in any given situation or environment for 90 days, because after this period of time, you are no longer surviving in a given environment but living in it. And in the urban Ranger course will teach you exactly that, how to live in your new urban environment.

IF WHAT YOU HAVEN'T READ SO FAR ISN'T ENOUGH TO CONVINCE YOU WE'RE IN DEEP TROUBLE THEN THIS BELOW CERTAINLY WILL...

Here are just a few events where people's lives were rocked, and people lost everything they owned. And people died.

2018 : Indonesia earthquakes and tsunami - More than 400 people are reported dead after a tsunami struck western Java and southern Sumatra islands during the evening of Dec. 22. Not to mention over 19 Mass School Shootings in the USA.

2016 : Disasters were all around us in 2016. Deadly earthquakes, life-depleting droughts, devastating storms, and unceasing wars are some of the worst disasters we haven’t heard much about. About 194 major natural disasters affected millions of people worldwide in 2016. Armed conflicts ( Many in Urban Environments) globally claimed tens of thousands of lives. This year saw a record 65.3 million people forcibly displaced.

2015 : Nepal earthquake (also known as the Gorkha earthquake),which killed more than 7,000 people and injured more than twice as many, magnitude 8.1 !!

2011 : The Tsunami in Japan forced 300,000 people to evacuate their homes. People died of starvation and other incidents.

2010 : The earthquake in Haiti killed an estimated 300,000 people. Think about that! That's 100 times the amount of people that died in the terrorist attacks on US soil on September 11

2010 : BP oil spill that caused marine and wildlife in the region to die after 210 MILLION gallons of oil flowed into the Gulf of Mexico. Many people who were dependent on the marine and wildlife to feed their families were suddenly out of business.

2005 : Hurricane Katrina hit the United States, causing billions in property damage. Looting, violence, and chaos erupted as violence spread across several cities. People were “sheltered" in the Superdome in New Orleans where 6 people were found dead and several people were raped.

This doesn't even take into account the dozens of tornadoes, blizzards, snowstorms, droughts, fires, earthquakes, mudslides, droughts, terrorist attacks, civil unrest, and other catastrophes that hit the United States and other regions on a daily basis.

P.S. We're living in some of the craziest times in history and many experts agree that it's not a matter of “if" but “when" you will face an emergency that is beyond what you and your family have prepared for. There's a famous truism among instructors getting soldiers ready for war.“When the bullets start flying, you WON'T rise to the occasion. You will perform half as well as you did during your best training."

As with all my courses: 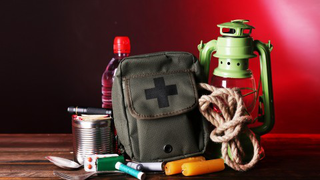 FAQs About "Surviving Doomsday: Learn The Secrets Of Urban Survival"