Thrive & Save Lives with Super Kind You

Principals, teachers and parents, would you like to save 100 hours per year or more?  Imagine four teachers' aids and four nannies that work for you 24 hours a day, 7 days a week.  They are almost free and they never demand a pay raise.  They are Super Peace Monkeys!    They are your online helpers that you can call on at any time of day or night for help with a child who needs to calm down, boost confidence and self-esteem, learn a new skill, or communicate with kindness.  Each one teaches a different Psycho-Social Super Power.

Years ago, I was working for an Ontario school board as a Psychometrist.  I was in charge of Psycho-educational testing for the most interesting kids in the entire board.  One of my first clients was a 5-year-old who was beating up smaller children on the playground.  When I asked him why, he said that he was his favourite superhero, Spiderman.  I said, "but Spiderman doesn't... wait... uh-oh... "  I thought to myself, "I think Spiderman does beat people up!"  How could I possibly compete with this kid's favourite superhero, who was regularly rewarded on TV for beating people up?  I realized that this kid, and most of our world leaders, need better superheroes, that teach kindness and compassion, not violence.

Many people say, "well, Spiderman only beats up the "bad guys".  Well, this kid called the other kids "bad guys", then beat them up.   Similarly, many wife abusers call their partners "bad", then beat them up.  Hitler's hero was a war leader when he was growing up.  Once an adult, Hitler spread a smear campaign against Jewish and gay people, calling them "bad guys".  In time, he created the Holocaust to beat them up and kill them.  Many money-hungry religious leaders call gay and LGBT people "bad guys" and incite mass murders (such as Orlando), parental rejection leading to homelessness, or mass suicides among LGBT youth.  Many racist cops call black people "bad" and then beat them up and /or kill them.  Black lives matter.  Your life matters no matter what your colour, gender, or sexual orientations.  You make a difference.  You are invited to join the dream. 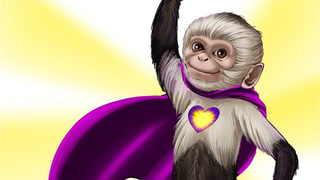 FAQs About "Thrive & Save Lives with Super Kind You"