Structure of the Atom

Thomson's Model/Rutherford's Model and Bohr's Model of an Atom, Neutrons/Distribution of Electrons in Different Shells
Course from Udemy
0 students enrolled
en
The Students will learn in lucid detail the structure of the atom as well as its important properties. They will also learn about sub-atomic particles and the various models that have been proposed to explain how these particles are arranged within the atom. The students will also learn about the valency of the atoms, Atomic Number and Mass Number, Isotopes and Isobars.

The orbital revolution of the electron is not expected to be stable. Any particle in a circular orbit would undergo acceleration. During acceleration, charged particles would radiate energy. Thus, the revolving electron would lose energy and finally fall into the nucleus. If this were so, the atom should be highly unstable and hence matter would not exist in the form that we know. We know that atoms are quite stable. There was thus a drawback in the Rutherford's Model of the atom.

In order to overcome the objections raised against Rutherford’s model of the atom, Neils Bohr put forward the following postulates about the model of an atom:

(i) Only certain special orbits known as discrete orbits of electrons, are allowed inside the atom.

(ii) While revolving in discrete orbits the electrons do not radiate energy.

These orbits or shells are called energy levels. An atom of each element has a definite combining capacity, called its valency.

The atomic number is defined as the total number of protons present in the nucleus of an atom.

The mass number is defined as the sum of the total number of protons and neutrons present in the nucleus of an atom.

Isotopes are defined as the atoms of the same element, having the same atomic number but different mass numbers.

Atoms of different elements with different atomic numbers, which have the same mass number, are known as isobars. 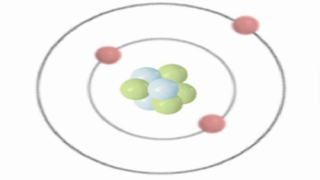 FAQs About "Structure of the Atom"