After getting your Private pilots licence the next licence is the Commercial pilots licence. This allows you to be paid to fly but it is still far away from an Airline Transport Pilots Licence. ATPL. You will need to build up 1500 hours pilot in command and pass ATPL exams to qualify.

The de Havilland Canada DHC-6 Twin Otter, currently marketed as the Viking Air DHC-6 Twin Otter, is a Canadian 19-passenger STOL (Short Take off and Landing) utility aircraft developed by de Havilland Canada and currently produced by Viking Air. The aircraft's fixed tricycle undercarriage, STOL capabilities, twin turboprop engines and high rate of climb have made it a successful commuter passenger airliner as well as a cargo and medical evacuation aircraft. In addition, the Twin Otter has been popular with commercial skydiving operations, and is used by the United States Army Parachute Team and the United States Air Force's 98th Flying Training Squadron.

Development of the aircraft began in 1964, with the first flight on May 20, 1965. A twin-engine replacement for the single-engine DHC-3 Otter retaining DHC's renowned STOL qualities, its design features included double-slotted trailing-edge flaps and ailerons that work in unison with the flaps to boost STOL performance. The availability of the 550 shp (410 kW) Pratt & Whitney Canada PT6A-20 turboprop in the early 1960s made the concept of a twin more feasible. A DHC-3 Otter with its piston engine replaced with two PT6A-4[3] engines had already flown in 1963. It had been extensively modified for STOL research. To bush operators, the improved reliability of turboprop power and the improved performance of a twin-engine configuration made it an immediately popular alternative to the piston-powered Otter which had been flying since 1951.

The first six aircraft produced were designated Series 1, indicating that they were prototype aircraft. The initial production run consisted of Series 100 aircraft, serial numbers seven to 115 inclusive. In 1968, Series 200 production began with serial number 116. Changes made at the beginning of Series 200 production included improving the STOL performance, adding a longer nose that was equipped with a larger baggage compartment (except for aircraft fitted with floats), and fitting a larger door to the rear baggage compartment. All Series 1, 100, and 200 aircraft and their variants (110, 210) were fitted with the 550-shaft-horsepower PT6A-20 engines.

In 1969, the Series 300 was introduced, beginning with serial number 231. Both aircraft performance and payload were improved by fitting more powerful PT6A-27 engines. This was a 680 hp (510 kW) engine that was flat-rated to 620 hp (460 kW) for use in the Series 300 Twin Otter. The Series 300 proved to be the most successful variant by far, with 614 Series 300 aircraft and their subvariants (Series 310 for United Kingdom operators, Series 320 for Australian operators, etc.) sold before production in Toronto by de Havilland Canada ended in 1988. 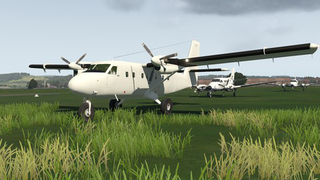