Master the ABAP programming language in under 1 hour!
Course from BitDegree
0 students enrolled
en
How to build custom logic within SAP applications
How to reverse-engineer SAP solutions
How to create ABAP reports
What steps to take to kickstart your career in SAP

It’s rather easy to learn something that is universally used, right? A popular general-purpose coding language (for example, Python) can be studied using thousands of courses and tutorials, as well as in various classes and schools. However, mastering a specific-purpose language, such as SAP ABAP, can be much trickier.

What makes this SAP ABAP course the right option for you?

As the demand for a specific skill is lower in the job market and the user community is much smaller, the supply of learning options are also significantly lower. In addition to that, most learners choose SAP ABAP training because they need the language to deal with their job responsibilities, which means the quality factor is of utmost importance. Because of this, most SAP ABAP courses are costly and can be hard to afford for someone who’s taking their first steps in the industry.

This SAP ABAP training course is introduced to you by Adrian Borja – a professional SAP application developer. As someone who uses the language in his daily job, he is the perfect instructor for anyone who wants to learn SAP ABAP from scratch.

The course combines text lectures with video demonstrations. This has multiple advantages to a student:

Before learning ABAP: what is it, exactly?

Prior to starting SAP ABAP training, its very name can sound almost abracadabra-like to an untrained ear. What are all these mysterious acronyms about? Let’s break this down!

First of all, SAP stands for Systems, Applications & Products (in Data Processing). It’s the name of a German software manufacturer that offers innovative business solutions for operation and customer relationship management. Now, ABAP is short for Advanced Business Application Programming. It is a high-level programming language. Learning ABAP is significantly easier if you have prior coding experience, as it does share some similarities with languages like Java, Python, C, and C++.

There are hundreds of programming languages out there. You could probably count the most widely-used ones on your fingers (and maybe a toe or two) – and SAP ABAP would not be one of them. According to the Tiobe index, it’s currently the 27th most popular coding language in the world. Why even bother to learn SAP ABAP, then?

The answer is simple: it’s a must-know for any programmer working with the SAP NetWeaver Application Server. Most SAP applications are based on NetWeaver. By using SAP ABAP, you will be able to develop data conversions, interfaces, forms, reports, and various other applications.

According to Glassdoor, an SAP developer makes $103K a year on average. Doesn’t that sound like a comfortable living? Enroll in the course and get closer to that dream today! 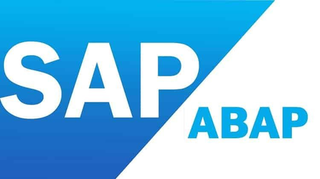