This course is by far the easiest and most effective method to learn Hip Hop Songs and production styles on piano. Within mere minutes you will be playing popular songs on piano from the greatest Hip Hop Producers of today.

Piano for Hip Hop Fans is a course is geared towards musicians who have a love and passion for Hip Hop and want to learn the different regional styles for piano or keyboard. Whether it be West Coast, East Coast, Southern, or International styles, hours of lectures have your interests covered in this beautiful genre.

The Roots - You Got Me (Produced by Scott Storch)

The World Is Yours - Nas (Produced by Pete Rock)

I Ain't Mad At Cha - Tupac (Produced by Daz Dillinger)

Another Round - Fat Joe and Chris Brown (Yung Ladd)

Ready - Fabolous and Chris Brown (Produced by The Runners and Monarch)

·A pressure-free approach to playing music, no judgment or stress involved with your musical journey.

·Take 20 minutes a day and watch your progress grow!

·Keyboard or a piano is all you will need to get started.

·Do the lessons on your own time and adjust them according to your personal schedule.

To learn piano, one will only need a will and desire to practice and most importantly, have fun. The only physical requirements needed to finish this course would be: piano/electric keyboard, computer, and a printer. The visual method of this course will allow you to quickly ascertain music theory, piano fingerings, rhythm, cadences, and chord structures within a very short amount of time.

Pace yourself and enjoy the musical journey as you will be exposed to 20+ great years of Hip Hop songs arranged for piano!!

Pianist, James Gaither provides a detailed, chord-based, and relaxed music course that will span well over 3 hours of concise and detailed instruction. Class and coursework will be enjoyable as his teaching style is stress-free and is oriented to have users learn at their own pace.

The supplementary materials in this course will be midi files for playback and experimentation within most music production software and accompanying sheet music for each respective lecture.

A mere 20 minutes a day will have you playing like a professional in no time! 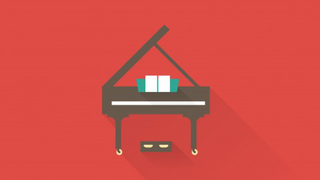 FAQs About "Piano Lessons For The Hip Hop Fan"