This Tutorial about Augmented Reality shows you all basics about Unity3D, coding in C# and the ARKit Plugin in less than 3 hours!

Why should you learn something about Augmented Reality?

-Augmented Reality is in it's early stages.
-There is still much potential to create awesome Applications.
-The demand for Augmented Reality apps is bigger than ever before
-Break into a brand new industry expected to be worth $165 billion by 2024
-The world tracking of Apples ARKit is amazing

Thanks to the powerful GameEngine Unity3D combined with C# it's really easy to create Augmented Reality Apps.

In the first 30 minutes we will learn all the important basics about the object oriented programming language C# combined with Unity3D.

Then we will create the main project from scratch! You will learn all the important basics about:

So what are you waiting for? Be one of the first person ever who will create Augmented Reality Apps like this! 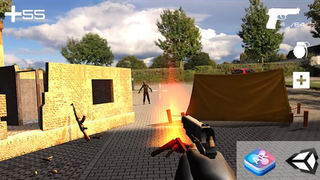