Be a Technology Creator Today !!! Discover the scientist in you.

Are you excited to create something immediately without getting into too much subject theory which bores you? Then you have landed at the right course.

#30 days money back Guarantee but you wont need that :)

- Great into to IOT

- This is a very useful course i have completed 1/2 of the course with in 1 or 2 weekends i have learnt a lot and i teach to my friends and i have i got second position and i am very happy.

Learn Theory while applying them

Research has shown that theoretical learning leads to decrease in interest in the subject and is one of the biggest hindrances to learn new things or new Technology. That's why we have created an Arduino course for every body where you start building Arduino applications and learn theory along with it. You can make such a complicated Technology look like a kids stuff !!

The 3 Parts of the Course

The course has been deliberately kept short to deliver outcomes quickly & we have knowingly skipped few concepts which are not necessary while starting but are learning barriers to start enjoying technology. You will learn concepts to understand the electronics or science behind every item, Circuit designing & building circuits from scratch, logic building for programming Arduino but be assured that you will start building Arduino applications from the very first session.

Easy to use, learn 2 software together

You will use a Scratch based programming platform which makes it easy for the learners to start writing Arduino programs immediately. You will learn different programming concepts like for loop, while loop, if & else statements but in an easy way. You can also learn the coding & its syntax used in Arduino IDE as the software generates IDE codes too.

Be a Game Developer & Build your own Arduino Playstation !!

Step by step approach to build animations, programming instructions to build games & Program the Arduino to build your own games which can be controlled by hardware (push button, Sensor) interfaced with the Arduino you will also program your computer so that you can play the games using your keyboard. You will build many games during the course like

Learn to program for the Game Features 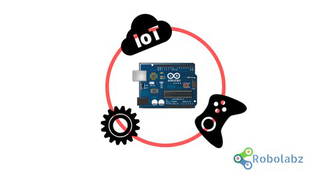